At the time of the Roman Emona
The inhabitants of Roman Emona found a water source in the hilly surroundings of their homes and waste water was drained into accumulation canals leading to the Ljubljanica River. 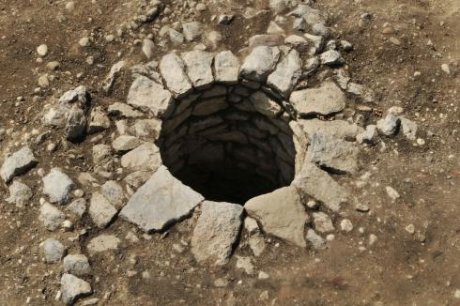 The Middle and Modern Ages and most of the 19th century
The public water supply did not progress. The waterworks leading from underneath Golovec towards Mestni trg in Roman times were used for many centuries, according to some sources even up until the earthquake of 1511. In the present urban areas of Podutik, Dravlje and Koseze, the Romans constructed waterworks leading from the Zlatek spring at Podutik that was still in use in 1737. The town inhabitants primarily used water from springs and village wells.

In the beginning of the 19th century, the water supply system was built section by section. 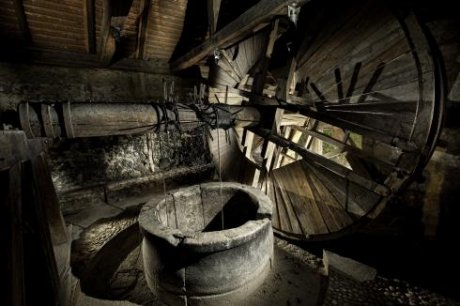 Opening of the well on the Castle Hill with a spindle and wooden wheel for lifting water (Photo: Domen Pal/Branko Čeak/Jože Maček).

1881
The town health council approves the proposal of the engineer Rudolph Wagner to construct waterworks.

1882
Foundation of the water supply system committee, chaired by Ivan Hribar who later became the mayor.

1888-1890 period
The town authorities put the preparation of the initial designs for constructing the public waterworks in Ljubljana in the hands of the mechanical engineer Oskar Smreker (1854–1935), who was then one of the most renowned designers and constructors of waterworks in Europe and an important researcher. He also led the construction of the Ljubljana water supply system. 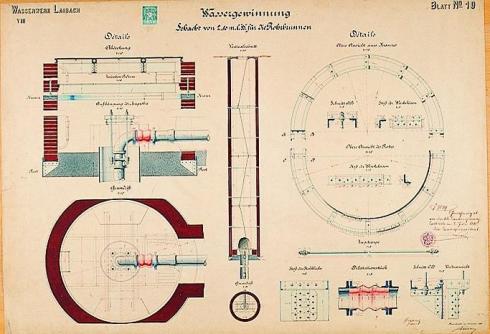 Design of a well from 1890 (Source: Historical Archives of Ljubljana)

1 April 1890
The Ljubljana city council adopts the "Rules on the construction of water supply facilities in front of and in houses of the city of Ljubljana" and the "Provisions on obtaining water from the Ljubljana city waterworks". 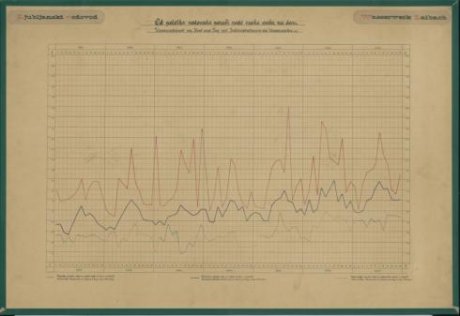 Water consumption in the period 1891–1897 (Source: Historical Archives of Ljubljana)

17 May 1890
Drinking water arrives to 606 houses in Ljubljana for the first time. 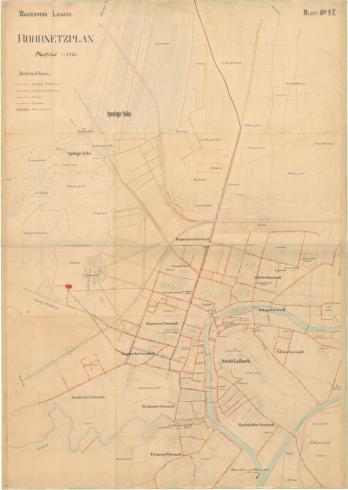 29 June 1890
Formal opening of the waterworks, comprising the Kleče water supply facility with four steam pumps with a capacity of 3,384 m3/day, the primary waterworks of 27,326 m and a reservoir on Rožnik hill with a volume of 3,030 m3. 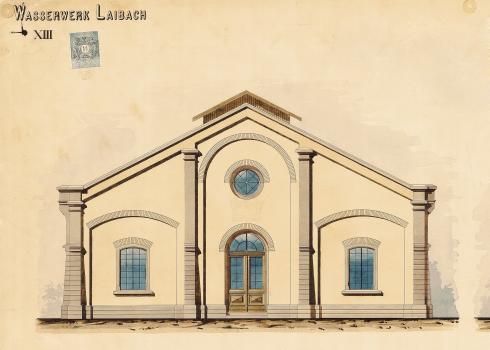 Design of the façade of the administration building of the Kleče water supply facility (Source: Historical Archives of Ljubljana)

1899
Jan Vladimir Hrasky, lecturer at the technical university in Prague, proposed the concept of the sewage system according to the urban design of the post-earthquake renovation of Ljubljana.

1916
Construction of the first part of the sewage reservoir on the left bank of the Ljubljanica River in the centre of the town. 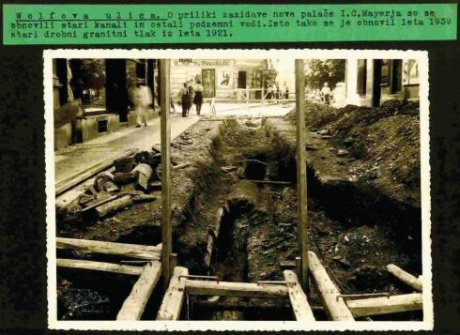 Construction of the sewage system in the 1930s (Source: Historical Archives of Ljubljana)

1928
The capacity of the Kleče water supply facility is increased to 27,000 m3/day. The length of the water supply network has grown to 127 km.

1933
Construction of the first part of the sewage reservoir on the right bank of the Ljubljanica River in the centre of the town. 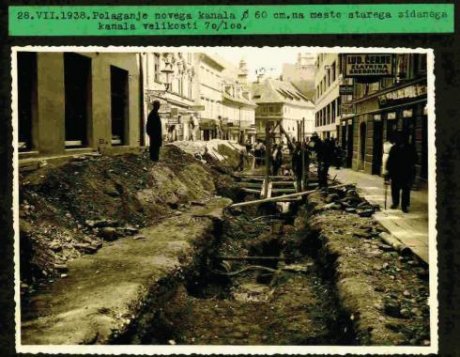 Construction of the sewage system in the 1930s – part 2 (Source: Historical Archives of Ljubljana)

1940
The steam boilers in the Kleče water supply facility were shut down and the pumps were connected to the power supply network. 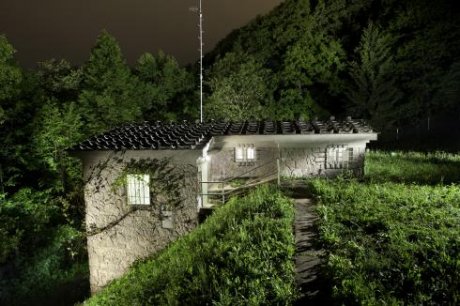 1951
Foundation of the company "Kanalizacija Ljubljana"

1989
The number of operating wells of the Kleče water supply facility increases to 16.

1991
Construction of the first phase of waste water treatment at the Central Treatment Plant of Ljubljana.

1998
The certificate of a quality management system according to the ISO 9001 standard is obtained.

2001
Renovation of the municipal treatment plant of Črnuče

2003
Acquisition of accreditation certificate no. LP-023 issued by the service Slovenian Accreditation according to SIST EN 17025 in the field of chemical testing.

2004
Adoption of the "Decree on the water protection zone for the aquifer of Ljubljansko polje" Obtaining of accreditation certificate no. K-041 of Slovenian Accreditation according to SIST EN 17020 in the field of cold water gauges control

2011
We were joined by Cevko, the mascot of the Ljubljana water supply and sewage systems.